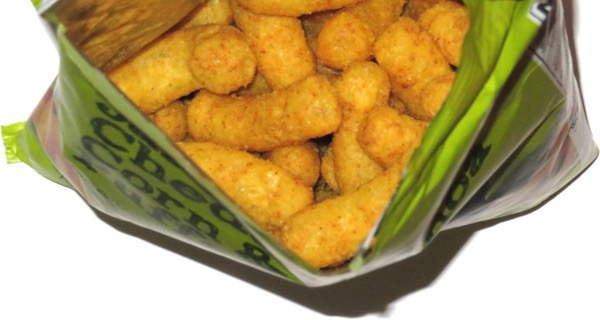 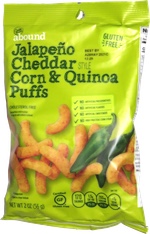 Taste test: Cheese puffs don't generally include quinoa, so this was definitely a new adventure in our cheese puff quest. One other notable thing was the word "Style" after "Cheddar" in the name, which was apparently their way of saying that there was no actual cheese (nor apparently anything dairy). The puffs were somewhat thin, with varying lengths and curvatures, a light orange color generally, plus some scattered splotches of a darker orange — but not your typical cheese puff bright orange in either case.

I crunched in to find a crispy, fairly dense feel that was nicely crunch, with a very nice taste of both jalapeño and cheese that was different from most other similar described snacks but worked really well. The burn of the jalapeño was in the medium range, but it worked really well to spice things up. As for the quinoa, I don't know whether it much affected the taste, but if it did, it wasn't for the worse. As for the lack of actual cheese, I don't think I would have noticed if I hadn't already known, and although wasn't the cheesiest taste, it worked. Very good.

Smell test: Kind of weird, but mildly cheddary and a hint of jalapeño.

From the package: “We always knew quinoa was a powerfully nutritious superfood. But it wasn't until we created our Jalapeño Cheddar Style Corn & Quinoa Puffs that we were knocked over by its mighty goodness. These perfectly spicy, deliciously flavored light and airy corn and quinoa puffs are so finger-licking good that you'll be at the bottom of the bag before you know it.”

This snack was discovered by Jeremy at CVS Health. Review published December 2020.