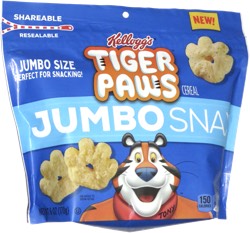 Taste test: Tony the Tiger is well known as the mascot for Frosted Flakes (for which he has repeatedly, though accurately, proclaimed, "They're great!") and this member of Kellogg's line of Jumbo Snax was based on his four-finger paw. Tony is a bit of a copycat in this regard, as fellow mascot Chester Cheetah has previously sold us cheese-based snacks Cracker Trax and Paws based on his hand. 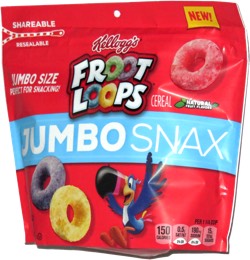 I crunched in to find a strong crunch and a taste that definitely wasn't the same as Frosted Flakes, but wasn't entirely unlike it either. There was a similarly endearing mix of sweetness and corn, not "Great!" but still pretty good.

Smell test: Kind of weird. Sweet, but me no like.