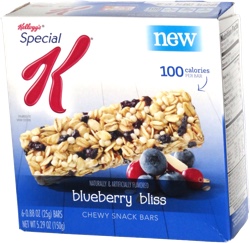 Taste test: These were fairly standard oats-and-crisp-rice granola bars — it looked like there was no Special K cereal in them — some some very dark bits of blueberry added as well, at least on first glance. The feel was a lot like Quaker Chewy Granola Bars, though maybe a bit less dense. There was some blueberry taste, in a good way, because I only sometimes like the taste of blueberry, and I did like this.

The weird thing was that although the picture of a bar on the front of the box showed blueberries in the bar (and the bar itself looked pretty much like that picture), the picture next to the bar seemed to show blueberries, cranberries and apple slices. And the ingredients listed both Apples and Cranberries before anything blueberry. And when they did list blueberry — two ways — it was as Blueberry Juice Concentrate and Blueberry Puree. So maybe the things that looked like blueberries were really blueberry-flavored cranberries. But when it came to naming the bar, blueberry won the day for some reason, even if those things were really blueberry-flavored cranberries.

From the package: “Say hello to new Special K® chewy snack bars” ... “Our deliciously chewy-with-a-hint-of-crisp bars are full of the good stuff for a satisfying snack you'll love. It's 100 calories of yum.”

This snack was discovered by Jeremy at Market Basket. Review published January 2016.