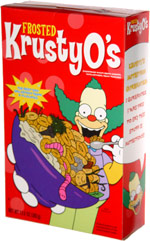 Taste test: This cereal was just a small part of the 7-Eleven merchandising bonanza surrounding The Simpsons Movie.

Unlike the box of (non-frosted) Krusty-O's that Bart ate in the episode "Round Springfield," this box didn't specifically promise "Free inside! One jagged metal Krusty-O!" On the bright side, the box depicted a jagged metal piece in the cereal bowl, along with a worm, a screw, rusty nails, grass, leaves and other contaminants, but unfortunately there was also a disclaimer that the illustration did not represent the actual product. When I opened the box, I found that the cereal was a knock-off version of Froot Loops, with pieces colored red, purple, blue, orange, yellow and green. With a name like "Frosted KrustyO's" I would have expected more of a Frosted Cheerios type of cereal, but that's OK, because we've come to expect inferior quality products from Krusty the Clown. The taste was pretty much the same as Froot Loops, which is to say, good. I didn't notice any jagged metal pieces or get appendicitis after eating two bowls of KrustyO's.

From the package: “The best you can expect from a TV clown” ... “Product shown is not representative of actual product inside” ... “Sweetened multi-grain cereal with natural fruit flavors” ... “Krusty's Nutrition Guarantee: I guarantee I was paid to say this stuff is nutritious!” ... “The Simpsons™ & ©2007 Twentieth Century Fox Film Corporation. All Rights Reserved.”