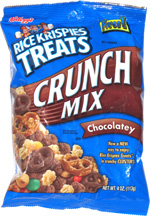 Taste test: This mix contained what the bag described as "Rice Krispies Treats® clusters" in addition to mini chocolate chip cookies, "Cocoa Balls" (basically a cereal sort of like Cocoa Puffs, but from Kellogg's), mini knotted pretzels (some plain, some fudge-covered) and "cocoa buttons" (an M&M's knockoff). The clusters were presumably the signature element of this mix, but they turned out to be downright bizarre, as they didn't look, feel or taste anything like Rice Krispies Treats. The were just smallish, off-white thingies, and they must have been made from broken-up Rice Krispies held together by sugar, because I couldn't actually see anything resembling Rice Krispies. They were solid, light and crunchy, with none of the softness and flexibility that makes everyone love Rice Krispies Treats. They tasted OK, fairly sweet, but really were nothing like Rice Krispies Treats. And they were overwhelmed by the other elements of the mix, as I'd estimate that they represented less than 1/20th of the bag by weight.

As for the rest of the mix: The mini cookies were extremely mini, but they were good, as they were very crunchy and actually did taste like chocolate chip cookies. They pretzels were pretty average but OK. The fake M&M's were OK, but I was surprised by how solid the crunch was on some of their candy shells, so the bite felt weird.

Smell test: Not much, surprisingly.

From the package: “Now a new way to enjoy Rice Krispies Treats® in crunchy clusters!”