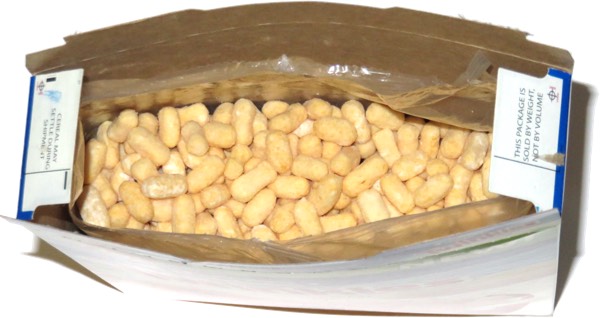 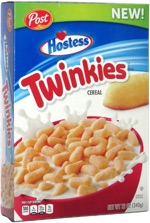 Taste test: It's rare that we review a box of cereal on Taquitos.net, but when they make one based on Twinkies, we do, because we'll review any kind of Twinkies. (The only other exceptions that come to mind were for Oreos Cereal and Frosted Krusty O's.)

The cereal pieces did indeed look like mini-mini versions of Twinkies, though some were extra-short and stubby, getting the proportions wrong.

Let's get a few things out of the way first: The cereal wasn't soft like Twinkies, and there was no creme filling. I can look past those changes because, well, it's cereal. But I can't get around the fact that the cereal didn't taste like Twinkies at all. It had a vanilla-like taste that didn't seem good on first bite but grew on me a bit while eating more pieces and then adding milk.

As sugar cereals go, it wasn't great, but it was OK (and marginally better than the Oreos cereal). But at no point did it taste anything like Twinkies.

From the package: “The snack cake golden child is now a cereal!” ... “Produced with genetic engineering” ... “The creamy, cakey, golden goodness that has enchanted the masses for generations is now making its debut on your breakfast table. Now you can enjoy all that flavor in a new way with Hostess® Twinkies® cereal.”