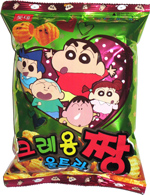 Taste test: These snacks were sort of ring-shaped, but they were narrow at the ends and bulging out in the middle, with ripples running the length of the rings. The rings were beige in color, with generally a few black sesame seeds stuck to the outside of each one.

We crunched in to find a crunchy texture and a sweet, cereal-like taste, just mildly cinnamony. Given the crazy bag design, our snackers had no idea what to expect, but people who tried them ended up liking the taste a whole lot.