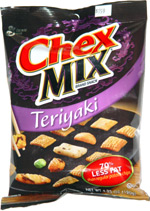 Taste test: This version of Chex Mix had the same mix of pieces as the Spicy Szechuan version, with Corn Chex, Japanese rice crackers and peas — and it even had the same picture of those pieces on the front of the bag.

The difference was the seasoning, which in this case was much milder than the very strong Spicy Szechuan flavoring. There was still a lot of seasoning, just not as much, and the most noticeable taste was actually not the teriyaki but the ginger, which really stood out. Our tasters liked this version a lot.

Smell test: Smells like ginger (the tuber, not the Gilligan's Island character).

From the package: “Loaded with your favorite Chex® cereal pieces, and flavorful crackers in many shapes!”