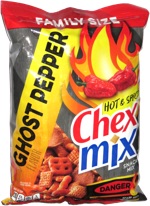 Taste test: Having eaten the tiniest bit of an actual Ghost Pepper, I know that the heat bar should be pretty high when evaluating a snack that claims a Ghost Pepper taste. We've had some notable failures in that regard.

I checked the Ingredients before opening the bag, and there was no mention of Ghost Pepper (nor any other specific pepper), so that didn't seem like a good sign.

I opened the bag to find that it contained Chex cereal with some noticeable seasoning on them, along with square grid pretzels, pumpernickel Melba toast, short squiggly pretzel sticks and small circular pretzels. I grabbed a bunch of different stuff and crunched in to find a mix of sweetness and some heat in the seasoning, but it was far, far short of ghost pepper heat. Some additional heat kicked in for an aftertaste, hotter than before, and maybe as hot as Chex mix has ever gotten — but still very weak by Ghost Pepper standards.

Smell test: Nothing great, it seemed almost like the Melba toast with the dominant smell.

From the package: “Partially Produced with Genetic Engineering” ... “Your taste buds are saying they want something hot and spicy. Your mind is telling you it's bored with ordinary snack choices. Your hand naturally reaches into a bag of Chex Mix trade and voila … snack craving solved.”

This snack was discovered by Jeremy at Grocery Outlet. Review published January 2019.