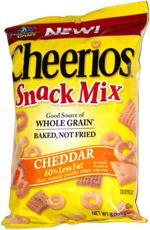 Taste test: When I first saw this bag, I thought it represented the Cheerios folks fighting back against the omnipresent Chex Mix. Given the fact that Chex and Cheerios are made by the same company, that didn't make a whole lot of sense. I took a close look at the bag and then it made even less sense, because it turns out that Cheerios Snack Mix actually contains Chex. In fact, it contains both Corn Chex and Wheat Chex. So you could just as easily consider this to be Chex Mix with Cheerios as you could call it Cheerios Snack Mix.

It was pretty good, as the Cheerios pieces had a decent crispness and went well with cheddar, but they were kind of small, not great for holding with the fingers. The larger Chex pieces had the good mild crunch that would would expect from Chex in a Chex Mix. The pretzels didn't really add anything positive here, as they lacked salt and just made the mix seem breadier. The triangular crackers were a bit odd, as I thought that they would like Cheez-Its, but they didn't taste that way at all, with a much different cracker taste. The bread twists had sort of a cracker-like taste and a decent light crunch. Overall, a decent mix.

From the package: “60% Less Fat than regular potato chips” ... “Packed with great taste and the goodness of whole grain, Cheerios® Snack Mix is a great snack for the whole family!”

This snack was discovered by Jeremy at Target. Review published November 2007.