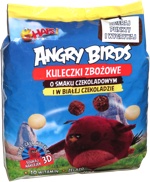 Taste test: This bag contained lots of small cereal balls in two different colors, with the vast majority of the pieces being dark brown in color, and a minority of the pieces off-white. The white ones were slightly bigger and appeared to have a white chocolate coating. Most of the bag consisted of independent pieces, but the white coating had some of them were stuck together in clusters.

We crunched in to find that the brown pieces tasted like Cocoa Puffs cereal, with a good helping of chocolate and a whole lot of crunch. The white chocolate ones provided a nice contrast, and the cluster combing both kinds were quite nice. The individual pieces were sufficiently small that even a cluster of several pieces was plenty small to pop into the mouth. If not for the stuff on the bag, I would never have made the connection between the shapes of the pieces and the projectiles from Angry Birds. But as a chocolatey, crunchy snack, this was pretty good!