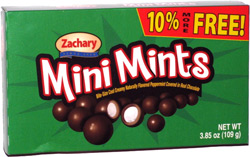 Taste test: From the name, I figured these were just a ripoff of Junior Mints, but they came in a large box for just a dollar, so they seemed worth a try.

I opened the box and was a bit disappointed that the clear bag inside wasn't entirely filled with Mini Mints. However, the Nutrition Facts indicated 2 servings of 11 Mini Mints each, and the box contained exactly 22 of them, so I can't really complain. The major difference between these and Junior Mints was the shape, as these were roughly spherical, versus the round-but flattened shape of Junior Mints. The texture was less soft than Junior Mints, but the taste was similar, with a peppermint filling and a dark chocolate coating. These seemed less minty than Junior Mints, but they were still quite minty. Pretty good.

This snack was discovered by Jeremy at Dollar Tree. Review published April 2011.