Taste test: This large, thin chocolate bar consisted of 4x2 grid of large, square sections with the World Market logo atop each one. There was a dark chocolate surface throughout, with no sign of anything inside. Breaking apart the sections to share them around was not easy — this was a very solid bar!

When we shared the bar around among some chocolate enthusiasts, everyone liked it, but specific reactions to the intended flavor varied. Some noticed a bit of wasabi, some noticed some ginger, and others noticed neither. Sea salt wasn't abundantly present, but there were some occasional bits of it that added a strong contrast to the chocolate. More noticeable was a kick of heat, thanks to the habañero that was included among the ingredients but not billed anywhere on the front of the wrapper. A pretty good bar.

Smell test: Seemed a little different than the usual dark chocolate, but couldn't specifically make out any ginger or wasabi.

From the package: “Mediterranean Sea Salt is harvested from the Southern tip of Italy where it is well known for its deliciously mild flavor and bright white crystals.” ... “A tasty blend of dark chocolate, sea salt & ginger wasabi.” ... “The Exotic Collection of Sea Salted Chocolate”

This snack was discovered at Cost Plus World Market. Review published . 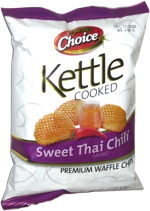