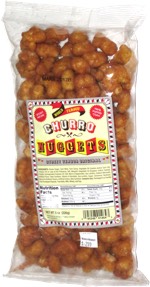 Taste test: These nuggets came in a bag that looked very different from the one containing The Amazingly Wondrous Nuggets from the same company, while promising a product much like the similar-looking clear bag of Stewart & Jasper Churro Nuggets.

The nuggets had somewhat powdery, cinnamon-looking surfaces, with a much darker color than the Wondrous ones. The pieces were generally C-shaped, but with lots of variation in the shapes. Most of the bag was made up of individual pieces, but some were stuck together into clusters. I bit in to find that the crunch level varied, with some pieces having a loud, sugary crunch, while others were softer. There was good mix of caramel and cinnamon that was sweet but not overly so, though generally it was less of a cinnamon sugar type of flavor than actual churros. Tasty!

This snack was discovered by Jeremy at Cost Plus World Market. Review published February 2017. 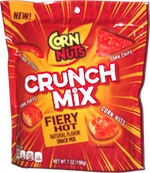