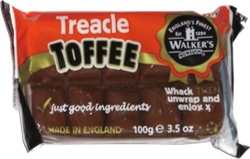 Taste test: This toffee was very similar in concept to the other Walker's Toffee — just bigger — as both encouraged the buyer to whack the whole thing against something solid to break it into pieces. In this case, it promised a Treacle flavor, which is apparently another word for molasses. The toffee was also thicker than the smaller ones, and it was divided into 10 sections in a 5x2 grid, topped by a clear plastic tray, with one of the rows of five sections spelling out the word "enjoy."

After I gave it a good smash (while still in the wrapper) it did indeed break, but some of the pieces were quite big. I tried one of the smaller ones to find that it started out a bit less rock-solid than the smaller kinds, then softened up considerably, delivering a very molasses-like taste. The big ones took a while to dissolve, and they stuck to the teeth a lot, but it was all delicious. Quite a sugar rush, very good!

Smell test: A bit different from the usual toffee smell.

From the package: “Suitable for vegetarians” ... “just good ingredients” ... “Whack THEN unwrap and enjoy x”