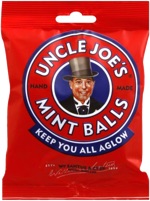 Taste test: These candies were individually wrapped in red wrappers with designs similar to the main bag, and each piece was roundish but a bit irregular, sort of resembling an oversized cough drop. The package showed the words "UNCLE" and "JOE'S" on the opposite sides of the pieces, but it was hard to make out the letters on the actual candies.

The Mint Balls turned out to be hard candies, and they were not minty in the way that most mint candies are. The mint was subtle, but the mix of just a little peppermint and sugar did make for a nice, lightly sweet candy.

From the package: “Keep you all aglow” ... “Ingredients: Cane sugar, oil of peppermint, cream of tartar” ... “The Premium English Mint” ... “Ellen Santus made her first batch of Uncle Joe's Mint Balls in 1898. They were produced in the kitchen are her small terraced house in Wigan, England, using only the finest, natural ingredients. She could not have envisaged how popular her recipe would become over 100 years later.”