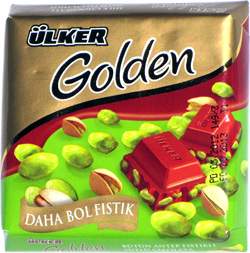 Taste test: This milk chocolate and pistachio bar and an unusual square shape and was fairly thick, with a 3x4 section grid.

Inside the outer paper wrapper was a gold foil wrap bearing the word "Golden" all over it. The shape of the bar was quite unusual as the sections were widely separated by a fairly thick chocolate, with chocolate shaped sort of like pipes rising up above the separator (but still far below the elevated sections themselves) connecting the sections together. From the top, there was no visible sign of pistachios, but the outlines of (lots and lots of) pistachios could be seen on the bottom of the bar, with most of them fully embedded in the chocolate but a few jutting out. I broke off some sections and could see lots of pistachios in the cross-sections. I but in to find varying texture of pistachios, with some fairly soft and others somewhat crunchy. They definitely didn't hold back on including lots of pistachios, and the mix of chocolate and pistachios was quite tasty.