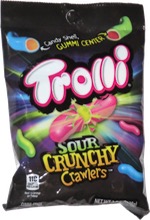 Taste test: Trolli is known for their very tasty gummies of many different types, but they tried something entirely new this time, coating the gummies with a candy shell to bring a little crunch to the equation. Each piece had an S-curve shape, with one flavor for the gummy interior and another one for the candy exterior. There were three different combinations: pink (but really kind of orange) Strawberry shell/green Watermelon gummy, green Lime shell/red Cherry gummy, and blue Raspberry shell/orange (but not really) Orange gummy. So there were two colors out of the six that didn't really match the ones shown on the package.

The word "Crunchy" had me expecting something more dramatic, but the candy shells did indeed add a light crunch. The flavors were intense and good. After biting into lots of them and experiencing both flavors, I tried sucking on a few pieces to see if I could taste just the outer flavor. The shell had no taste, at least for as long as I had the patience not to bite in. So if you want to get lots of flavor, just bite in.

From the package: “They'll make you say, 'I got the crunchy munchies' ” ... “Safety Warning: Small objects such as hard and soft candies may inadvertently become lodged in the throat.”

This snack was discovered by Jeremy at Five Below. Review published January 2021.