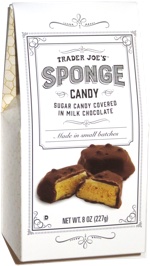 Taste test: This candy was in most ways similar to Menz's Honeycomb Candy from Australia, as it was chunks of honeycomb covered in milk chocolate. The shapes in this case were far more random than the cube-like ones from Menz, as they had a fairly uniform thickness of about 3/4 inch but came in a variety of shapes and sizes.

The honeycomb had a light feel with the distinct honeycomb crunch, and it tasted quite good. It worked well with the milk chocolate coating, which distinguished itself by being quite a bit better than the Menz chocolate. Even with some of the big pieces, it was hard not to eat far more than one at a time!

From the package: “Sugar candy covered in milk chocolate” ... “Made in small batches”