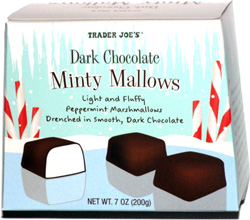 I was impressed by the number of marshmallows, since the Nutrition Facts indicated that there would only be 10. Each was rectangular, so different than the typical cylindrical marshmallow, but the overall volume was about the same. When I bit in, I was surprised by how spongy the texture was. Marshmallow candy runs on a spectrum from melty to spongy, and these were just about completely spongy, so they took a lot of chewing. That made them a lot like regular (untoasted) marshmallows, but just a little more meltiness would have made them much more enjoyable. The taste was pretty good, with lots of mint, lots of marhsmallow and a little chocolate, and they weren't particularly messy to eat.

Smell test: Very minty (too minty) on first whiff when I opened it, but a good mix of mint and chocolate after that.

From the package: “Light and Fluffy Peppermint Marshmallows Drenched in Smooth, Dark Chocolate” ... “Product of France”

This snack was discovered by Jeremy at Trader Joe's. Review published May 2012.