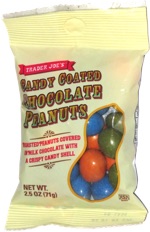 Taste test: This was an obvious knockoff of Peanut M&M's, with shells that were in a subset of same muted colors as Trader Joe's knockoff of non-peanut M&M's: green, orange, blue and yellow.

Some of the shells were dented, with white showing through the color. The taste was good, and it seemed more peanutty than M&M's, as the chocolate was less noticeable in the taste. There were three pieces that appeared to be way out of place, as they had the smaller shapes of the non-peanut ones. But when I bit in, I found each actually had half a peanut inside — never seen this happen with Peanut M&M's.

This snack was discovered at Trader Joe's. Review published April 2019.