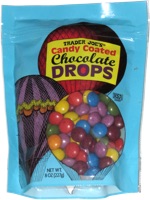 Taste test: This candy was clearly Trader Joe's take on M&M's, but as you'd expect from TJ's, they didn't make it a strict imitation. The most noticeable change was the colors. There were seven different ones — yellow, green, blue, light purple, dark purple, orange and red — and they were much more muted than the bright M&M's colors.

I was anticipating that they would replace the M's with a split between T's and J's (like their sour gummies), but they did not; nothing was printed on the surfaces. The colorings listed in the ingredients were much different from the ones typically seen on ingredient lists. The milk chocolate taste was definitely different from M&M's, probably a bit less appealing to me than the M&M's chocolate, but still good milk chocolate.

This snack was discovered by Jeremy at Trader Joe's. Review published January 2018.