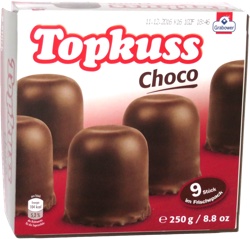 Taste test: When we ate the delicious Grabower Minis, we were just blown away by the best marshmallow texture ever. The only real question then was why they were called "Minis" — mini relative to what? Now we know.

These chocolate-covered marshmallows from the same company in Germany were quite large, at over two inches across and over two inches tall, with shapes that were kind of like the Pac-man ghosts. Despite being large, they felt like they weighed nothing. Unlike the Minis, which came with three different chocolate coatings, all nine of the ones in this box were dark chocolate-coated.

I bit in to find that the bottom of each one was actually a round, thin cookie, with the whole rest of the interior below the dark chocolate coating being the softest, meltiest, lightest marshmallow that I've ever experienced. This was great. It could get a bit on the messy side, because the inside was so melty, but everything about these was top-notch.

From the package: “9 Stück em Frishepack”

This snack was discovered by Jeremy at Karl's Sausage Kitchen & European Market. Review published May 2016.