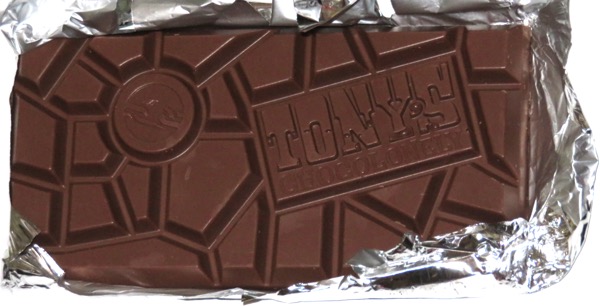 Taste test: We've reviewed several chocolate bars in recent years that dared to break free from the standard grid, and this one may have done that better than any of them. I was expecting a bar that was large but generally ordinary, until I unwrapped it and saw a beautifully designed bar. It featured a rectangular section with the Tony's logo, another that was a circle depicting a broken chain, and then a whole bunch of random polygons making up the rest of the 25 sections — no two sections shared the same shape. The random design didn't make it easy to break off sections cleanly, but the gaps between sections were deep, so it didn't get too messy.

The bar was very thick, probably twice as thick as your average chocolate bar. The milk chocolate had a nice soft feel, and it was smooth, creamy and excellent. Great!

From the package: “Made in Belgium” ... “Crazy about chocolate, serious about people” ... “Hello, I'm Tony's Chocolonely. I'm an unusual kind of chocolate bar. I exist to end slavery in the chocolate industry. You're probably thinking 'huh.. slavery?' Yes. In fact, right now slaves are working on cocoa farms in West Africa, many of them are children. My mission is to make 100% slave free the norm in chocolate.”

This snack was discovered by Jeremy at Cost Plus World Market. Review published July 2017.