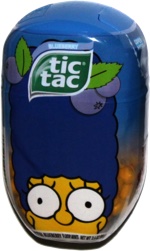 Taste test: This special version of Tic Tacs was introduced alongside Homer and Bart versions, in this case promising a blueberry flavor, presumably to match Marge's blue hair.

As with the Homer ones, the candies featured Marge's face with three different expressions. Quality was once again lacking, as the sides of the face were cut off in places, and in Marge's case this was taken even farther, since every single one had the top of her head cut off (though perhaps this was intentional, part of the running joke about Marge's unusual hairdo). Despite the blue theme, the pieces were actually the same Simpsons yellow color as the Homer ones. They tasted pretty good, with a sweet blueberry taste, with a hint of mintiness in the aftertaste.