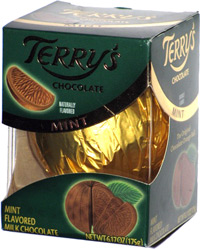 Taste test: This large sphere of chocolate followed the same formula as the orange-flavored chocolate shaped like oranges, except that they used mint chocolate and ditched the orange flavor entirely, while retaining the orange shape. Since I like both chocolate and oranges, but don't like the combination of the two at all, using mint seemed like a good idea.

It was fun to open the package, as once I got inside the cardboard box, I found the ball of chocolate wrapped in foil with a sticker interacting me to "whack & unwrap." I didn't actually whack it, but instead I peeled off the sticker and unwrapped some of the foil, to find that the chocolate was pre-sliced into 20 orange-like sections. I kind of banged it a little to break some of the sections loose. I then pulled some sections loose to find that they even took the effort to emboss the orange slice texture on one edge of each slice's exterior and on the "orange peel" side too (though the other edge was smooth and untextured). They even included some chocolate that simulated the look of the rind in the middle of the orange.

The key thing here was that the mint chocolate was quite good. Not quite as minty as some, but minty enough, which a smooth, creamy chocolate taste. Fun to eat, and plenty of pieces in the orange to serve a whole party.

From the package: “The Original Chocolate Orange Ball!” ... “Made in Poland”