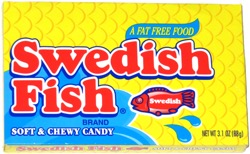 Taste test: These fish-shaped gummies were fairly big as gummies go, measuring over two inches long, and they were all red. The top side of each had various fish details, including eyes, gills, scales and a tail, while the bottom side was flat, with no details.

Unlike real fish, these fish had the word "Swedish" on the top surface. But that may have been the most Swedish thing about them, because according to the box that they came in, these fish were manufactured in Canada (which is not part of Sweden). They had a dry feel in the hand, not moist like some gummies, but they were plenty moist when I bit in, and they tasted really, really good. Yum!

Did you know they made a Swedish Fish version of Oreos? Now you do.

From the package: “Made in Canada”

This snack was discovered by Jeremy at Dollar Tree. Review published February 2016.