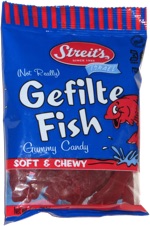 Taste test: These snacks really weren't anything like gefilte fish, as they contained no actual fish, didn't taste like fish, and — unlike gefilte fish — they actually were shaped like fish.

They were just a gummy candy that was kind of a knockoff of Swedish Fish, but not quite the same. They had the same red color, a similar shape and size, and a similar very good fruity flavor. The texture was quite different, as they were softer and easier to chew than Swedish fish, and they also didn't have the word Swedish written across each piece. Oddly, there was also one — and only one — much smaller fish, about the size of a Goldfish — in the bag.

This snack was discovered by Jeremy at The Butchery, Brookline. Review published .