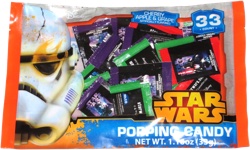 Taste test: This plastic bag contained a whopping 33 Star Wars-themed packets of candy, divided equally between Apple, Cherry and Grape flavors. "Popping candy" is best known under the brand name Pop Rocks, but it seems that the folks at Disney/Lucasfilm figured their own brands were well known enough that they didn't need to go with the known candy brand.

The green Apple ones featured Yoda and his bright green lightsaber on the packet; the red Cherry ones, Darth Vader and his red lightsaber; and the purple Grape ones, an Imperial Stormtrooper (who use blasters, not lightsabers). Each one contained a mix of various sized pieces of flavored popping candy matching that version's color, plus what appeared to be plain white sugar. The stuff popped in the mouth as expected, and the flavors were pretty good. There wasn't a huge amount of stuff in most of the bags, but at least there were a lot of them, so you could just go with a double dose for increased effect.