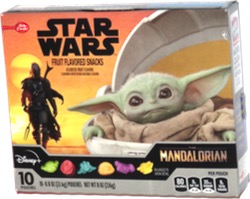 Taste test: I'm a Star Wars fan, but I haven't seen any episodes of The Mandalorian — yet I've still been unable to escape the hype around Baby Yoda. It sounds like people have reacted even more strongly to The Child/Baby Yoda than to the bounty hunter that stars in the series. That was reflected in this gummy assortment, as three of the six featured shapes involved Baby Yoda.

The box contained 10 individual packets, each containing about eight gummies. The Baby Yoda types were a green one depicting just his head; a yellow one with a whole-body design; and an orange one where he was standing against a background waving something around. The other three depicted the Mandalorian's helmet in red; and maybe some kind of space ships in blue and blue. They all felt moist and tasted very good, with fruit tastes that did correspond to the colors (green being apple, not lime).

One oddity here was the seemingly unnecessary profusion of brands on the box. The Star Wars logo is obvious, and even Disney+ was more tolerable on this box than when the Disney logo first started to appear on Star Wars products (since the show is actually on that streaming service). But why did General Mills need to include Betty Crocker? It's a brand that I generally associate with cake mixes, and this was an eat-from-the-box snack involving no preparation at all.

From the package: “Contains Bioengineered Food Ingredients” ... “Keep kids safe! To avoid choking, give Fruit Flavored Snacks only to children who can easily swallow chewy foods. Children should be seated and supervised while eating.”