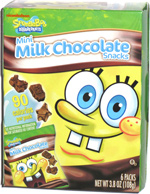 Krabs. The first pack I opened contained four Patrick Stars, two Mr. Krabs and just one SpongeBob, but the assortment was random. The characters were fairly detailed and quite recognizable, even without any of the colors with which they're usually portrayed. The chocolate was darker than shown on the package and had some scuffing on the surfaces, but there was generally a pretty good appearance. The consistency was about what you would expect from milk chocolate, but maybe a little more solid, and the taste was nothing fancy as chocolates go, but not bad for a quick hit of milk chocolate. I've never watched the show for more than a few minutes, but apparently there are more than just the three characters, so I was surprised that they included only the three. I liked the fact that this was chocolate, because most of the cartoon-based candies of this type tend to be gummy fruit candies, and generally they're not very good. Or at least not as good as chocolate.

From the package: “90 calories per pack” ... “SpongeBob SquarePants created by Stephen Hillenburg.”