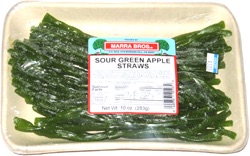 Taste test: This gummy-like snack had one of the more unusual appearances for its genre, as it looked a whole lot like a bunch of uncut green beans. They furthered the illusion by packing it in a foam tray covered in clear plastic wrap, much like certain veggies in the produce aisle.

The color of the "green beans" was pretty close to where it should be for that, but there were some shiny whitish spots that weren't as green bean-like. Still, when young Tommy offered these to folks during and after a November Project workout, lots of people thought he was trying to hand out frozen green beans as a gag. The pieces were stuck together, but they were very flexible and reasonably easy to separate. They were chewy and fairly soft and had a nice sour (but sweet) apple taste. The green beans left the fingertips somewhat sticky, but they were pretty good. Tommy liked them a whole lot.

Smell test: Not much, but mildly sweet.

This snack was discovered by Jeremy at Ralph's Cherry Hut. Review published .