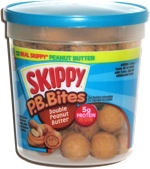 I didn't really know what that meant, so I just opened it up, grabbed one and bit in to find out. There seemed to be three things going on: the outer PB coating, a thin layer in between that looked like it was maybe chocolate, and a soft core also made from peanut butter, with a similar texture but a slightly darker color. I thought at first that maybe the center was sweeter than the outside, but when I sucked away the outside on one, it seemed just the opposite, maybe less sweet. Anyway, the feel was soft throughout, and the taste and texture were quite good.