Taste test: This candy bar was fairly thin in its package, and if felt extremely light in the hand, as it weighed only 0.77 oz. We opened the wrapper and saw that a series of thin peanut butter stripes on the top of the otherwise milk chocolate exterior, half of the stripes perpendicular to the bar and the others a bit diagonal. 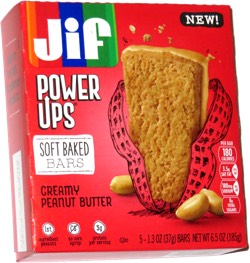 We crunched in to find a fairly light feel and a good mix of PB and chocolate, mildly sweet and definitely not too sweet, as the whole thing was muted a bit by the three layers of wafers. Despite a much different appearance, the taste was very similar to Nutty Bars, Buddy Bars and their named competitors, and it was good, but it was on the weak side compared with any of those, just not as fillling. That was probably because of how thin the bar was — it had a lot less substance than those other ones. This one boasted a low calorie count (110), but you would probably need to eat at least two bars to be as satisfied as you would be from one of those larger bars, so that might negate the effects of the whole low-calorie thing. Even those larger ones often come in two-packs, where nobody really eats just one!

This snack was discovered by Jeremy at Costco. Review published December 2013.