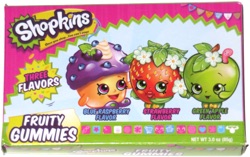 Taste test: This box of gummies was a bit unusual, in that it contained three different varieties of gummies, each with its own color/flavor/shape, yet instead of combining them into a single bag in the box as is usually done, there was a separate clear bag for each kind.

The nice thing about this packaging choice was that it took away the challenge of having to sort through a mixed bag to find the kind that you want. The even better thing here was that all three kinds were quite good, as the pieces were fairly large, had detailed shapes, a moist feel and very nice flavors. I had no idea what Shopkins was (but now though some Googling I've learned that it's a line of toys, books, trading cards and a YouTube show) but they do make good gummies. Blue raspberry, strawberry and green apple were all very tasty.