Taste test: After very much enjoying Russell Stover's Caramel Egg and Marshmallow Egg, we had high hopes that this one would combine the best of those two. 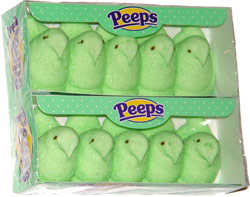 Like those, it was actually shaped like half an egg, with a flat edge where the egg would have been cut in half, and all of the exposed surfaces were coated in milk chocolate. I bit in to find that white, melty marshallow filled the interior starting from the flat edge, with soft caramel along the top of the curved portion. There was more marshmallow than caramel (by volume, anyway) and the taste was really quite good. Because of the way the fillings were distributed, some bites were just marshmallow and chocolate, while others combined those two parts with the caramel. The variety of having caramel bites and non-caramel bites added some nice variety, and both of the taste combinations worked well. I managed to hold the egg by the wrapper to avoid getting my fingers sticky, but it was tricky to do, so this one could get messy if you're not careful.

From the package: “Covered in Milk Chocolate” ... “Handcrafted in Small Batches®” ... “Made with 100% real chocolate”