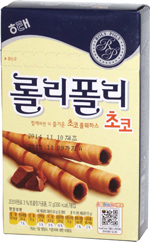 Taste test: This box contained seven separate foil packs of two wafer rolls each. Inside each yellow foil pack (or really just most of them, as we'll explain), the two rolls had generally a light beige color, with a darker beige spiral running along the exterior. Each one was over 4 inches long and about 3/8 inch in diameter. The inside was lined with a thin layer of chocolate. They looked really nice. We crunched in to find a great brittle and light feel, with several thin layers wrapped outside the chocolate. Vernon who tried one or two was quite thrilled.

The odd part was that despite the box being in flawless condition and the wrappers inside perfectly lined up, the pack at one end was just a disaster area inside. There was half a roll that was largely intact, along with lots of fragments that seemed to add up to the rest of that roll. The second roll was absent. The half-roll still tasted great, as did the fragments when I poured them onto a plate and scooped them into my mouth with a spoon, but in terms of appearance, it was just the opposite of the perfection of the other ones.