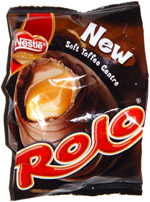 Taste test: I didn't initially realize from the packaging that this was an Easter egg version of the Rolo.

I thought it was just a giant, individually wrapped Rolo. A careful reading of the label indicated that this was a milk chocolate egg filled with caramel. Each side of the egg had a Nestle logo and some curved markings. The taste was kind of like a regular Rolo from a tube of Rolos, but the size of the egg and the large amount of caramel filling kind of changed the mix, as the chocolate and caramel didn't mix together quite the way that they do in a much smaller regular Rolo. After munching my way through half the egg, I popped the rest into my mouth all at once, and the taste was closer to a regular Rolo, as the chocolate and caramel had a better opportunity to mix that way. It was much messier to eat than the regular Rolos, but it was still good chocolate and good caramel, so I won't complain too loudly.