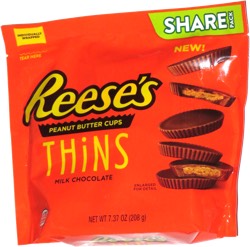 Taste test: Thin is evidently in, with thinner versions of Oreos and Chips Ahoy appearing in recent years, so why not a thin one to go along with the 71 other kinds of Reese's?

The Thins came as individually wrapped pieces in a large bag. Within each foil wrapper, there was no additional wax paper holding the cup.

In terms of measurements, they were noticeably thinner than regular Reese's (40% thinner, according to the company). They looked to be about the same diameter as the standard cups, but when we measured, the diameter on top was 1-3/4 inches (vs. 2 inches for standard cups). For actual amount of snack, it was a bit over half as much, at .39 oz vs .75 oz. If you go by calories, it's 56.66 vs. 105.

The cups looked good, with smooth surfaces and generally the same look as standard cups, except thinner. We bit in to find that the taste was mostly standard Reese's, but the thinner peanut butter center made for a less intense kick of PB, while still providing about the same mix of chocolate and peanut butter in the end. The package rated the serving size at 3 cups, but that didn't seem realistic, given that there were 18 cups in the bag — it was very hard to resist eating more cups. Probably that was the whole point of making them thinner!

This snack was discovered at Rite Aid. Review published February 2019.