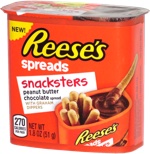 Taste test: Years ago, Reese's used the Snacksters name for their snack mix that came in 100-calorie packs, but this product using the same name was something else entirely.

Viewed from the top, the package was split about 50/50 between a compartment holding nine dipping sticks and a tub of Reese's dipping spread. That view was, however, a bit deceptive, as a check from the bottom revealed that the side with spread only went down about halfway, with open air below. The sticks were a bit under 3 inches long and had various shades of beige.

I dipped my first stick into the spread and crunched in to find a loud-but-light, brittle crunch from the stick, with a rich, thick, smooth mix of peanut butter and chocolate from the spead. The taste didn't really remind me at all of a Reese's peanut butter cup. The spread was sufficiently strong that I could not taste the graham cracker at first, but there was a very nice graham cracker flavor in the aftertaste. Even with the bit of deception going on with the dipping well, there was still plenty of spread to put lots of it onto all nine sticks. Pretty good.

Smell test: Mild chocolate peanut butter spread, but not the same as a Reese's cup.

From the package: “peanut butter chocolate spread with graham dippers”

This snack was discovered by Jeremy at Wal-Mart. Review published October 2015.