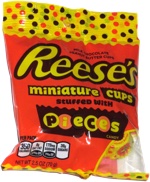 Taste test: When we reviewed the original (non-miniature) Reese's Stuffed with Pieces, the big disappointment was that the Pieces stuffed inside were not whole intact Reese's Pieces, but instead they were crushed ones, which somewhat defeated the point. We heard from one snacker that the Big Cup version had whole Pieces, but we haven't found it yet. This one featured an extra-thick cup but with a smaller diameter, so we needed to try to see if they chopped up the Pieces on not.

The pieces were individually wrapped in a yellow wrapper with brown and orange polkadots, plus the cup wrapper was stuck to each one. Given the past experience, we were fully expecting to see partial Pieces, but it turned out that there were two surprises. First, the Pieces were indeed intact! But also, they were not the Pieces we were looking for — they used a miniature version of the Pieces that we didn't previously know existed. The result was good, with a light crunch from the candy shells, plus a different PB taste from the mini-Pieces than the rest of the filling. They could have named this one "Reese's Miniature Cups Stuffed with Miniature Pieces."

Smell test: Definitely a bit different than regular Reese's. Even though I couldn't see the Pieces from the outside, I could smell them.

From the package: “The orange color is a registered trademark.” ... “Serving Size 1 package”

This snack was discovered by Jeremy at Dollar Tree. Review published January 2018.