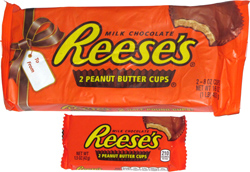 Taste test: Do you like Reese's a lot? We sure do! We've reviewed 51 kinds of Reese's, and we're tempted by any new variety. This one stood out from the crowd not for its recipe, as it sought to duplicate the original, but for its sheer size.

It was huge! Each of the two cups was more than 10 times the volume of a regular Reese's cup, and the whole package totaled 2300 calories, vs. 210 for a regular twin pack of original Reese's. When we pulled the first cup out of the wrapper, it looked like one of those mini pies, except bigger and denser.

Each of the two cups was about four inches in diameter on top (narrower at the bottom) and about 1-1/4 inches thick. Just under an inch of that was the peanut butter. Since they looked like pies, I tried to cut them like pies — I got a huge knife and sliced away, and it cut cleanly and easily. I cut the cup into sixths (matching the official serving size), poured myself a glass of milk and held my first slice with a folk. It tasted mostly as expected, but it did seem a little different from a standard Reese's, probably because of the change of scale. The chocolate seemed less melty, and the sheer thickness of the peanut butter filling made it so that the two elements didn't mix quite as much as with a regular-sized cup. Given the availability of up to 12 slices of that size of what I ate, I doubt many Reese's fans could keep themselves to just one slice. Personally, I had three slices in my first sitting.

Good stuff, can't wait to see what Reese's dreams up next!

Smell test: Not quite the same as original Reese's. Seemed milder.

This snack was discovered by Jeremy at Target. Review published August 2014.