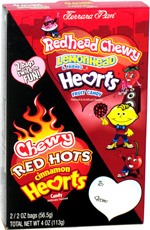 Taste test: This large box had one of the longest snack names I've ever had to type in, and it contained two separate clear bags of candies, though the combined volume of the two bags was quite a bit less than the volume of the box (and therefore there was a lot of air in there too).

Let's start with the simpler of the two bags, the Red Hots. The odd thing about the Red Hots was that for candies that were supposed to be shaped like hearts, they hardly resembled hearts at all. They looked like lumpy triangles with rounded corners. But they tasted good and a had a nice texture, chewy rather than hard like the regular Red Hots, and they packed quite a lot of cinnamon heat, both tasty and intense.

The other bag had four different colors of candy, ranging from pink to dark red, all of which surprised me, because I was expecting yellow (as in Lemonhead). However, I looked more closely at the box and realized that it was "Lemonhead & Friends" with characters on the box that resembled an anthropomorphized strawberry, watermelon, cherry and (of course) lemon. That explained the pink, red and dark red ones, but the lack of a yellow ones still didn't make any sense. The shape and texture of these was pretty much the same as the Red Hots: triangular with rounded corners, kind of lumpy. The pink ones did indeed taste like watermelon, pretty good. All of the other colors had maybe a bit of cherry and maybe a hint of strawberry, but they didn't taste convincingly like either. None of them tasted anything like lemon. All tasted pretty good, but overall, the whole thing seemed weird because of the lemon disconnect.

From the package: “2 bags twice the fun!”