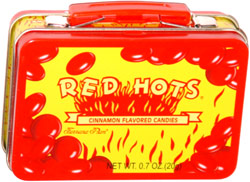 Taste test: These candies had a shape and size similar to M&M's, but most of the pieces were slightly irregular, not quite round.

They had a very nice hot cinnamon taste that grew hotter the longer that I sucked on them. To get an even stronger hit of cinnamon, I sucked on them for just a few seconds to soften up the candy and then bit in. (The outer shell was hard enough that when I tried just biting in right away, I was afraid I might break a tooth.) The lunchbox-style container that I bought these in was mostly empty, as it contained just a much smaller cardboard box of candy. Oddly, the lunchbox said it contained 0.7 ounces of candy, while the cardboard box said 0.8 ounces.