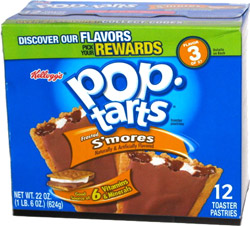 Taste test: This tempting flavor of Pop-Tarts had a beige-colored frosting on the exterior (presumably this was the graham cracker element of the s'mores) and inside, alternating stripes of marshmallow and chocolate filling.

There are two ways to eat a Pop-Tart — right out of the bag, or toasted — and given how essential meltiness is to a s'more, it seemed pretty important to try these toasted. When I ate the first one at room temperature, the taste was OK, but the chocolate and marshmallow flavors really didn't stand out, and the dominant taste was the graham crackers. When I toasted the next one, the taste was definitely better, as the flavors were much richer, but I wouldn't say that it actually reminded me of a s'more. Indeed, the "marshmallow" portion of the filling neither felt nor tasted much like marshmallow, and I couldn't really taste much in the way of chocolate, so it wouldn't seem likely that the combination of the these elements would say "s'more" anyway.

Smell test: Pretty good, I could actually smell some marshmallow and a bit of chocolate.

From the package: “Good source of 6 Vitamins & Minerals”

This snack was discovered by Jeremy at Costco. Review published August 2012.