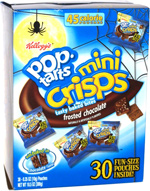 Taste test: This was a strange new take on Pop-Tarts, as Kellogg's is apparently OK with using the Pop-Tarts brand to sell something that really is nothing like Pop-Tarts. Well, almost nothing: They did look sort of like ultra-miniaturized Pop-Tarts. Each piece had a rectangular shape, about a half inch by three-quarters of an inch and very thin, and they were frosted. But otherwise, they were nothing like Pop-Tarts, as they were made from a different material (crunchier and more cereal-like), had no filling, and definitely can't be toasted.

I was expecting a chocolate taste, but they actually tasted a lot more like Golden Grahams (mmmm!), despite looking nothing like Golden Grahams. They did taste quite good. Each packet contained about a dozen pieces totaling 45 calories, and the box contained 30 packets. Having 30 packs was a good thing, because one 45-calorie pack wasn't nearly enough for a snack. But on the downside, lots of packets, each containing almost nothing, was a huge waste of packaging.

From the package: “tasty baked bites” ... “with baked-in chocolate flavor”

This snack was discovered by Jeremy at Target. Review published April 2012.