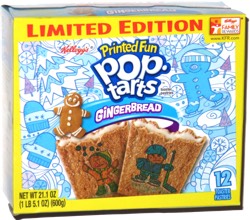 There was no frosting on the outside of the Pop-Tarts, but there was a pattern of holes. The outside surfaces (prior to toasting) had a fairly light beige color, far lighter than your typical gingerbread, and the filling was white. I tried one toasted and one untoasted, and both were good, but I liked the toasted one a lot more. The gingerbread taste was very good, but it felt better with the light crunch of the toasted one than the soft feel of the other one, and the sugary frosting was way better warm. An unusual flavor for Pop-Tarts, and very good.

This snack was discovered by Jeremy at Market Basket. Review published February 2016.