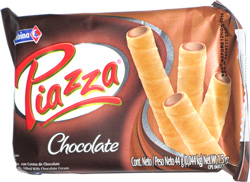 Taste test: This package contained a plastic tray filled with a dozen wafer tubes, with a beige exterior and a hollow inside coated in milk chocolate. One nice thing about them was that the tubes held together quite well, without the crumbling away of some of the brittle shell as we've seen in some similar products.

We crunched in to find a good soft feel with a nice mild taste of chocolate on then first bite, then a stronger chocolate taste after that. It looked like the tube was made up of a single thick layer, rather than multiple thin layers like other wafer sticks. That probably explained the better durability, and it made for a somewhat different feel without all of those brittle layers, but it was less messy and still quite good.