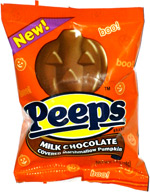 Taste test: When I peeled open the wrapper, it took me a few seconds to figure out how they considered this to be a pumpkin, but it was shaped kind of like a Jack-o-lantern, with the features badly washed out.

It had a bit of a pumpkin stem, plus Jack-o-lantern eyes, but the eyes jutted out rather than in, so it was kind of lame. I bit in to find that the exterior was a thin milk chocolate coating, and the interior was a low-density orange-color marshmallow. Lame shape aside, I liked the taste of the marshmallow and chocolate. It was kind of handy that I could hold it by the wrapper to keep my hand clean.

This snack was discovered by Jeremy at Yummies, Kittery, Maine. Review published September 2010.