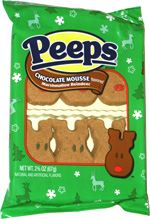 Taste test: It too me a minute to figure out that this version of Peeps was supposed to look like the head of a reindeer, because the shape was pretty obscure (it could have been a rabbit head or any number of things) but I guess the green eyes and red nose should have given it away.

The six Peeps in the package were joined together into two groups of three and were fairly easy to separate. The exteriors had a granulated sugar feel, and the whole thing felt quite spongy, as you would expect from Peeps. Between pulling them apart and holding one to eat it, you will definitely get some sugar on your hands. The taste was OK, just mildly chocolatey and a bit marshmallowy, but nothing great. I guess it's OK to call it chocolate mousse, but it's nothing I would crave. These might work better as a decoration on cakes than as a standalone treat.

From the package: “Great for Decorating and Craft Projects!” ... “A Fat-Free Candy”

This snack was discovered by Jeremy at Five Below. Review published December 2012.